That being the case, vowel tuning is one of the most important steps you should take when learning a foreign language. Personally, it’s the first thing I do.  Let me show you how I do it..

The Great Lie of Your Childhood

If I asked you “what are the English vowels?” would some variation of this song pop into your head?

If so, then I regret to inform you that your childhood was a lie! This stupid song has corrupted millions of small helpless children every day, and I’m not just talking about the traumatizingly corny melody.

The notion that there are only 5 vowels (or 6 if your version of the song had that little coda at the end  – “and sometimes y!”) is one of the number one things I attribute the difficulty adults have in learning foreign languages.

Combine the different accents of English, and there are actually around 20 different vowels! It’s just that we represent these vowel sounds using only 5 symbols.

Reducing the number of vowel scripts makes the alphabet song a lot easier to remember, but the simplification also has a very devastating effect of distorting our vowel perception.

Say both words out loud and you should realize that they sound the exact same, yet they use different vowels to represent them. So which vowel is it in the end? – a, e, i, or “eigh”?

On the other side, “full” and “butt” both use the letter “u” to represent the vowel, but are they the same sound? What about “call” and “Cali”? Would you say that they both have an “a” vowel, even though they sound different?

Here’s the moral of this rant – forget everything you know about vowels. Accept the fact that your English teacher screwed you over and read on so you can learn how to fix the damage.

What exactly is a vowel then? A vowel is the sound you make when you let “voiced” air pass freely through your vocal tract.  Block the air with your tongue or lips or anything else, then you’re making a consonant sound.

How do we distinguish between vowels? There are actually three things that distinguish vowels, but in this post we’re just going to focus on the most important one – tongue position.

To change the sound of a vowel, you move your tongue up, down, forward or back (side to side doesn’t change anything).

When you “tune” your foreign language vowels, you adjust the sound by moving your tongue either up or down or front and back.  As simple as this sounds, it actually takes a good deal of practice to develop an awareness of tongue movement, since it’s never anything we do consciously.

To make things simpler, we’ll take that side-shot of the head and turn it into a geometric figure called a vowel chart (below). 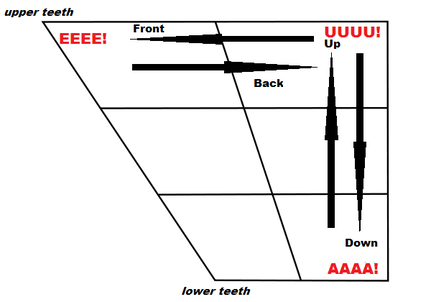 Now notice how the vowels /i/, /u/ and /ɑ/ are all located at the endpoints of the chart.  You can think of these as “Cardinal Points” to help you navigate your tongue.

Let’s start with developing an awareness of the “front-back” motion.  Do as I do in the audio below and alternate between the /i/ and /u/ sounds. When you go from /i/ to /u/, you are moving your tongue BACK.

When you go from /u/ to /i/, you are moving your tongue FRONT.

For the "up-down" movement, do as I do in the audio and alternate between the /u/ and /ɑ/ sounds. When you first try, you will move your lower jaw up and down to assist the motion, but this movement is redundant.

Keep your jaw still so that you can isolate the tongue movement. When you go from /u/ to /ɑ/, you are moving your tongue DOWN.

Once you have developed an awareness of tongue movement, you can use vowel charts to guide your vowel pronunciation. Here’s the process:

Let’s take the example of an English speaker learning the /o/ vowel in Spanish. If you compare the vowel charts, you will realize that the tongue is in a slightly lower position for the Spanish /o/. So we know then that we have to train our perception and muscle memory to hear and articulate this difference. Listen below for a comparison between the English “no” and Spanish “no.” Now what usually happens when we adjust is we “overshoot” to the next vowel in our sound system. In this case, an English speaker may overshoot and hit the /ɔ/ vowel. This is the vowel in the word “dog” (American pronunciation).

Another example is a Portuguese speaker learning the /æ/ vowel from the English word “cat” (American Pronunciation). They start from the native vowel /ɛ/ (which also exists in English words like “bed” and “head”), then slightly lower the tongue while trying not to overshoot to their next vowel /a/. In case you were wondering about the symbols, these are from the International Phonetic Alphabet. It is the main standard used in phonetics when writing about vowel sounds.

It evades the problem of people having different symbols representing different sounds across languages. It also gives each vowel sound its own unique symbol, as opposed to English writing which forces 20 vowels sounds to share 5 symbols.

IPA seems complex at first glance, but it’s actually simple if you learn it within a context. In a future post, I’m going to teach you IPA in the context of rap lyrics.

Once you understand IPA, it’s easy to look up vowel charts on wikipedia and do the analysis we just did here on your own. Though in my Flow Series Courses, I save the trouble of analysis for you and present it to you all in a simple way.

Till next time, Keep on Flowin!